J is for Juxtapose!

This week’s lesson is going to be short and sweet, but it’s so fun!

When you have some free time, go on and google {juxtapose+photography} and check out the AWESOME photographers that try and embody the the idea of juxtaposition in most of their images.  It makes for some really awesome, and to me, modern looking images to enjoy!  Some things that I found in trying to prepare this lesson had me saying “MAMAMIA!”

Juxtaposition is a big word for a concept that is easily grasped when explained through (my favorite thing) pictures! {image from hubpages.com}    Here you can see the church is juxtaposed beside a tall building that is blue in contrast.

This next photo and description was found at xpdigital: 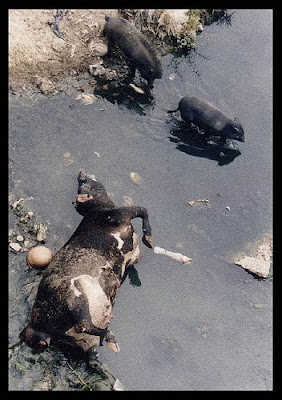 “Here you could see a dead cow and two living pigs in the same river. The cow is left to rot and the pigs are oblivious to the scene and just trying to survive. It gives a feeling of irony between the living and the dead. (Somewhere in Nepal)”

This image is by Donovan Marion and I love love LOVE it.  The blatant-ness of the way the “big boy little boy” bikes are juxtaposed makes me giggle 🙂


Juxtaposition can be used in so many ways, and in many art forms, to me, it comes off as enjoyable sarcasm, whit, and irony–all of which, if you know me, I love in all forms!

Definition:
Basically it means capturing the relationship between subjects in a photo so that each part of the image has some bearing on and relativity to the other.  There might be some technical artsy sort of definitions but I see things from color, to size and textures, to life and death all as a way to oppose and juxtapose to make images appealing.

Here, I have found a description from katyzzz, a great photographer I follow online, about one of his best images capturing a great juxtaposition:

“I can remember one of my best photos, taken from a ferry which highlighted the technique showed the white navy ensign which formed the spinnaker sail billowing out in full wind and placed very effectively next to Fort Dennison.

It was a masterpiece of photographer as I first had to instantly recognize its merits and be very speedy with shutter to capture it immediately, as the sail was a moving object and seconds either side would destroy the particular placement, moving objects require just so much speed when compared with a non moving image, but the result is all the more rewarding. Skilled photographers recognize this but the unskilled would just as soon have the photo of the whole ship or of the whole island or of both close by each other which would still be juxtaposition, but not with such flair and photographic excellence as the other.”

I just love the way he explains this simple moment, but how much power it had to his photographer’s eye!  {It gets me all excited!}

When you are out with your camera look for natures irony, and photography from the perspective of juxtaposition once in a while and I think you’ll enjoy your results!

katyzzz (from above) said it best when he said “It doesn’t matter that, if at first, they are not sensational; it is the awareness of the technique which you will increasingly develop as you move forward with your photography skills, that is important.”

Okay, seriously, isn’t Juxtaposition so fun!  I LOVE it.  This is probably my favorite lesson so far.  Not only because I keep getting to say “juxtaposition” (which is fun to say) but because it allows for so many awesome images!  Like seriously, if I went to school for photography, and you had to major in something in photography school, it would be juxtaposition. For real.

Here’s a sneak peak from this past Saturday’s wedding I shot for! Enjoy!

« Mr. and Mrs. Brunker!Lauren and Brian are engaged! »